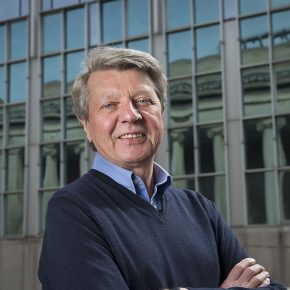 On April 21st 2022*, Krzysztof Matyjaszewski will start a series of lectures in several French CNRS laboratories as the Ambassador in Chemical Sciences in France. J.C. Warner Professor of Natural Sciences at the Carnegie Mellon University, Krzysztof Matyjaszewski is well known for the discovery of atom transfer radical polymerization (ATRP), a novel method of polymer synthesis that has revolutionized the way macromolecules are made. He tells us all about this revolution.

What is ATRP and why is it so useful?

Conventional radical polymerization is the simplest addition reaction to create long macromolecules, called polymer chains, from building blocks called monomers. It is used worldwide to prepare several of our plastics. Yet, it is a non-controlled reaction that produces polymer chains with a broad length distribution. While this is acceptable for most commodity plastics, polymer chemists have been working very hard on developing controlled/living yet simple polymerisation methods for the preparation of more complex macromolecules with better-controlled length distribution and multiblock, branch or even star architectures. These architectures combine properties of different polymers, i.e. hydrophobic and hydrophilic, soft and hard, electrically conducting and isolating, optically active, biodegradable, etc. at the molecular scale to yield materials that could be used in drug delivery or biocompatible devices, flocculation and water treatment, cosmetics, food industry, shock resistant, lightweight materials, adhesives, paints… ATRP is precisely such a robust catalytic process for the controlled/living radical polymerization of vinyl monomers. It relies on the use of a readily available copper-based catalyst that intermittently puts to sleep a growing polymer chain, enabling concurrent growth of all polymer chains, minimizing side termination reactions and allowing one to reactivate a grown polymer chain for the addition of a second or multiple consecutive monomer blocks.

Since you discovered ATRP in 1995, what have been the most important developments in the field?

In our first ATRP experiments in 1995, we used 1 mol % of Cu catalyst. We then progressively developed much more active catalysts that can now be used at parts per million concentration and are easily removable. However, since radical termination cannot be entirely prevented, we need to continuously regenerate these catalysts by using various mild reducing agents such as ascorbic acid, sugars but also light, electrical current or mechanical forces.  This also opens possibility for an excellent external temporal and spatial control of polymerization and very safe polymerization procedures. Recently, we extended this control to using visible or even infrared light and also developed oxygen tolerant systems to run ATRP in water under open vial conditions. This enables synthesis of many ATRP bioconjugates with nucleic acids, proteins and even exosomes. In parallel, we developed surface initiated ATRP to modify surfaces of flat wafers or nanoparticles and increase their dispersibility, dramatically enhance lubricity or generate antifouling and antibacterial materials that can also respond to external stimuli.

And how about it’s industrial use?

Since 1995, over 40,000 scientific papers appeared on controlled radical polymerization, more than half of them on various aspects of ATRP.  In parallel, over 2,000 patents on ATRP have been issued. At Carnegie Mellon University, we formed a consortium to facilitate knowledge and technology transfer to industry. We have had so far 60 members from chemical companies across the US, in Japan, China, Korea, South Africa, Mexico and Western Europe, including 3 companies from France.

In 2019, CNRS Institute of Chemistry has initiated a program called “Ambassadors of Chemical Sciences in France”. Its ambition is to give prestigious foreign researchers an opportunity to visit a series of French laboratories active in their field. These visits not only include top-notch conferences by the ambassador, but are also a good opportunity to establish preliminary contacts and foster international collaborations for the visited French laboratories. What do you expect from this program?

For many reasons related to culture, history, food, science and people, France is my favorite country, along with Poland and the USA. We have many very close friends in France. In my group, I have had the pleasure to host 20 French students and postdocs. They have subsequently made very successful careers in either French industry or academia, like professor Destarac, Lutz or Nicolaÿ. We have published together over 50 papers and another 40 with my collaborators from Toulouse, Paris, Strasbourg, Montpellier or Marseille. This visit to France will give me a chance to discuss science, re-establish scientific and personal contacts, disseminate our research and, of course, enjoy beautiful French culture and food.

*Originally planned for 2020, the visit has been postponed to this April because of the sanitary crisis